Celestial Matters: a terrestrial exhibit of art by Crissie Murphy exhibited on the International Space Station. Special Reception with Buzz Aldrin to benefit the Challenger Center at the Charles Bank Gallery NYC. (as seen in Scientific American, October 2011) 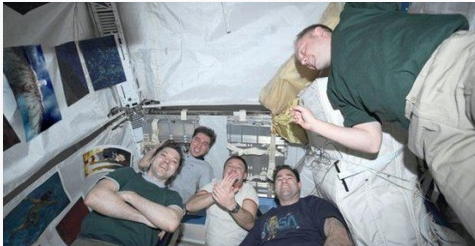 The crew of The International Space Station, Expedition 18, with Wingman Blue

The artist and Buzz Aldrin at Charles Bank Gallery, SoHo
with the official stamp of the International Space Station

“The artwork is the intersection of science, technology, space travel, and the innate and insatiable human desire to discover new things and explore new frontiers. It’s a tribute to what happens when imagination and scientific study meet.”
– Buzz Aldrin, Celestial Matters opening reception

SOHO, NEW YORK CITY — When American space tourist Richard Garriott launched to the International Space Station in 2008, he carried with him a collection of original artwork by Crissie Murphy to display on the orbiting outpost in a unique weightless exhibit. These pieces of art that flew in space, and graced the walls of the space station, are now set to make their terrestrial debut here this weekend. The Celestial Matters art exhibition features works of art by American artist Crissie Murphy that were displayed on the International Space Station during Garriott’s flight. The exhibit, which is presented by Zero G Art, opens today (Oct. 14) at the Charles Bank Gallery in Manhattan’s Lower East Side, and will run through Sunday (Oct. 16). The artwork on display is inspired by the intersection of science, technology, space travel, and the innate and insatiable human desire to discover new things and explore new frontiers, said event organizer Heidi Messer-Martin, of Zero G Art. “It’s a tribute to what happens when imagination and scientific study meet,” Messer-Martin told SPACE.com. “It shows you what the potential of human beings really is. It’s the next level of evolution — first, is the ability to do something, and then comes the ability to analyze and process that, and the next step is the appreciation of it. I think art is the culmination of all that.” There’s something about space The Celestial Matters exhibit will be the first time these pieces of art are shown on Earth. The artwork highlights the beauty of exploration and discovery, and the importance of continuing to push the boundaries in science, art and life. “The International Space Station is a symbol of collaboration,” Messer-Martin said. “The fact that a private citizen like Richard Garriott, who is totally self-made, could find a way there, and the fact that there are companies like Space Adventures that enable people to get there — I think even ten years ago, it would be beyond peoples’ imagination that they could do this. This exhibit is a symbol of human potential in every element, and it’s a tribute to that.”