Telling the Story: The Military Art of Crissie Murphy

at the Chelmsford Center for the Arts
—By Molly Loughman, Wicked Local

Depicting a slice of life the average person seldom sees has served Crissie Murphy well. Her military artwork currently hangs in the Pentagon and in the art gallery at the Chelmsford Center for the Arts.

Documenting operations through her paintings overseas and at home at the request of the Pentagon, Murphy saw the CCA as another opportunity to share her illustrations locally.

Flattered by the reception and support she received at last Sunday’s CCA Veterans Auditorium dedication, Murphy hopes her work brings awareness to people. Her passion for depicting the everyday heroics ‘getting the job done’ by illustrating those behind the image of the military, has yielded Murphy some unforgettable experiences.

Earning a bachelor of fine arts degree in illustration at Massachusetts College of Art in 1985, with additional studies at the School of the Museum of Fine Arts, Murphy’s career has since landed her on flight lines with the helicopter crews, still clutching her sketchbook.

Deployed to Haiti and Guantanamo Bay shortly after the earthquake to document relief efforts, the Methuen native is equipped with portable art supplies and a camera at all times. Sketching onsite, on the ground and sometimes balancing in a moving vehicle or helicopter, Murphy has to be ready to pick up and run. When she returns to the studio she uses the photos and sketches as reference for paintings.

Murphy was the recent recipient of the American Society of Aviation Artists Founder’s Recognition Award for her work conveying Special Operations Forces. Her paintings are permanent additions to the USAF Collection

Admiring the Air Force from afar and at home growing up sparked Murphy’s interest in the military, whose father served in the Army Air Force Medical Corps in World War II. Murphy remembers her father taking her to air shows, a fascination she’s never outgrown. Familiar with the Air Force Art Program, in existence for over 60 years, Murphy says she’s always loved the reportorial task for military artists in capturing the unseen.Art has always had a place in Murphy’s life and she’s made it her personal mission for it to stay in hers. Extending the family legacy, Murphy’s great grandfather was a painter and her mom was fashion illustrator. Nowadays Murphy seeks inspiration and guidance from Keith Ferris, best known for the murals in the Smithsonian Air & Space Museum and named to the Aviation Hall of Fame. She also appreciates artwork from the golden age, including those of NC Wyeth, Howard Pyle, Norman Rockwell, Frederic Remington and Winslow Homer, artists whom she says had a story to tell. 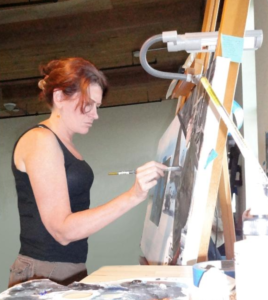 What was involved when you documented operations for the Pentagon overseas and in the states?

I usually have only a few days notice before a trip, and since I never really know what the experience will entail, I pack my art supplies, clothing and gear for an adventurous camping trip and camera gear, and a good supply of Cliff bars, on occasion I’ve had to run for the “last flight out” and I don’t want to have a lot to carry! I usually know exactly what myself and my gear weighs for the loadmaster on a cargo plane. I usually travel aboard military transport and stay on the base. When I am on assignment, I’m on orders from the Pentagon, and to be given the courtesies and privileges of a full colonel. It sometimes takes a while for the troops to relax — it’s not easy knowing someone is sketching you, but after a little while everyone gets used to it, even hamming it up now and then.

There are always unexpected aspects – the last trip was to Patriot Defender Exercises in Texas, which were held from 3 p.m. to 4 a.m., which meant I was sketching by glowstick in the pitch-black desert.

Why this sort of artistry?

I want to show what our military men and women are doing, the effect they are having – the human side, which is often the most heroic – as in Haiti, a soldier comforting a child, offering aid, medical triage or even just handing out bottled water, it’s the human interaction that is the most powerful – and beautiful- image.

What was your experience like when you participated in the prestigious US Air Force Art Program?

When I was first accepted into the program, I assumed I would be doing an occasional commission or portrait, then I got a call asking if I would like to attend exercises with the Air Mobility Command, and the next thing I knew I was aboard a C130 Hercules flying a med evac training mission out of McChord AFB in Seattle with a Pakistani medical team (see the painting “Life Lessons”). I had no idea it would be the adventure it has turned out to be, I have met some amazing people, there is camaraderie amongst the artists of the AFAP.

What images did you capture during your most recent excursion to Haiti and Guantanamo Bay when documenting the Hurricane relief efforts?

En route to Haiti following the earthquake to document Operation Unified Response, we had a stop over in Guantanamo. Less than 200 miles from Haiti, Gtmo was designated as the hub of the aid operation. Dozens of helicopters and planes took off daily to ferry supplies and personnel to the stricken country or to American ships off the coast. While I was there, I had the opportunity to spend time on the flight line with the helicopter crews- they were very friendly, as if it wasn’t unusual to have someone sitting there on top of the helicopter with a sketchbook while they worked. They were working round the clock to keep everything running smoothly – in 100-degree heat. The painting “For Those Who Keep ’Em Flying” is a tribute to the behind-the-scenes effort that the success of a mission-and so many lives- depends on.

Originally my mission was to accompany a shipment of relief supplies and document the loading/transport and delivery, and then fly home – once I got there I asked that my orders be extended and it evolved into several days of sketching the local people, the international teams of relief workers and military personnel. I try to focus on the people involved. I spent some time with the folks in the crowd outside the airport and in the tent city waiting for some kind of aid. The people had a look of sadness, but were so calm and patient. I tried to capture it some portraits. My sketchbook was passed around a lot! There were some unforgettable moments; the faces of the children were heartbreaking.

“The Guardian” is a soldier keeping watch from the top of an armored vehicle at The Toussaint Louverture International Airport-a scene of controlled chaos, the buildings were unstable and still experiencing aftershocks-and lines of people waiting for a flight out.

How did you choose which pieces of art to display in Chelmsford’s CCA and why?

I wanted to show a variety of missions, with a broad interest, since the show is to benefit the Wounded Warrior Project, I chose pieces depicting the troops, in particular the title piece Telling the Story Mission to Fallujah April 2004 On my first mission I was assigned to the Air Mobility Command Rodeo, where I met two men whose helicopter had been shot down by an rpg in Fallujah in 2004, this painting tells the story of that attack, and shows the spirit of the two men as they told me their story.